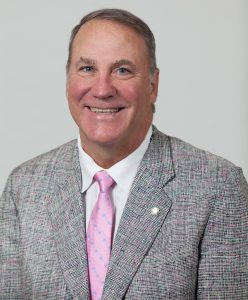 Mark D. Miller, MD
Distinguished Professor
S. Ward Casscells Professor
Division of Sports Medicine
Department of Orthopaedic Surgery
University of Virginia
Team Physician Emeritus, James Madison University
Director, Miller Review Course
Dr. Mark D. Miller is the S. Ward Casscells Professor of Orthopaedic Surgery and former Division Head of Sports Medicine at the University of Virginia. He is a highly decorated retired Colonel in the US Air Force. He is a Distinguished Graduate (top 3%) of both the US Air Force Academy and the Uniformed Services University of the Health Sciences (USUHS). Upon graduation from the Air Force Academy, Mark Miller served as a civil engineer in the Air Force and earned his Professional Engineering (PE) certification. After medical school, Dr. Miller completed his residency in Orthopaedic Surgery at Wilford Hall USAF Medical Center in San Antonio Texas and a fellowship in sports medicine at the prestigious University of Pittsburgh. He served as an Attending Surgeon and Head Team Physician at the US Air Force Academy and as Chief of Sports Medicine and Deputy Chairman at Wilford Hall USAF Medical Center prior to his recruitment as the Division Head of Sports Medicine at The University of Virginia in 2000. He served as Head Team Physician for James Madison University for over 15 years and earned two FCS National Championship rings. Dr. Miller has authored over 200 articles and has authored and/or edited 40 textbooks, including eight editions of the best-selling Review of Orthopaedics and served as the American Orthopaedic Society for Sports Medicine (AOSSM) representative Editor for OKU Sports Medicine 5th Edition. He has earned several publishing awards for his textbook contributions. He has been named a “Top Doctor” on numerous local, state, regional, and national listings. Mark has also mentored countless medical students, residents, and fellows at the University of Virginia and has given numerous lectures, conducted research, co-authored papers, and worked with them literally side-by-side his entire twenty years at the university.

Mark Miller is perhaps best known for his many contributions to the education of medical students, residents, fellows, and practicing orthopaedic surgeons around the world. He has been recognized as outstanding faculty by orthopaedic residents on three separate occasions. He is also a recipient of the Distinguished Educator Award and Outstanding Surgeon Outpatient Surgery Award at the University of Virginia. Dr. Miller developed and moderated Instructional Course Lectures at both the American Academy of Orthopaedic Surgeons (AAOS) and the AOSSM every year for the last 20+ years. He founded the AOSSM Sports Medicine Specialty Course and has chaired several other courses for the Society. Mark has served the AOSSM as Education Committee and Council Chair, was the inaugural Industry Relations Chair, and was both a Traveling Fellow and a Godfather. He also served on the AOSSM Council of Delegates, the Examination committee, and the Traveling Fellowship committee. Dr. Miller was an AOSSM Program Chairman and currently serves as Secretary on the Board of Directors. He has received the AOSSM George Rovere Award for Education, the USUHS Distinguished Service Award, and the Virginia Orthopaedic Society Lifetime Achievement Award. He also was recently recognized as a co-winner of the inaugural AOSSM Master’s Competition for lifetime contributions to innovation. Mark was selected as the incoming Vice President of this prestigious society and will serve as President during the 2022-3 academic year. Dr. Miller’s research interest include complex knee focusing on multiple ligament injuries, revision ACL reconstruction, articular cartilage injury treatment, and meniscal repair and transplantation. He is married to Ann Etchison and has four grown children, all of whom have completed advanced degrees.