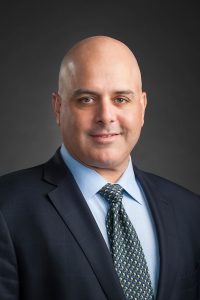 Amar S. Ranawat, MD
Professor of Clinical Orthopaedic Surgery
Weill Cornell Medical College Hospital for Special Surgery Department of Orthopaedic Surgery
Dr. Amar S. Ranawat was born in New York City. After graduating from Cornell University Medical College, he completed his orthopaedic residency at the Hospital for Special Surgery. In 2002 he completed his fellowship training in Adult Reconstruction under the direction of his father, Dr. Chitranjan S. Ranawat. He is currently a Professor of Clinical Orthopaedic Surgery at Weill Cornell Medical College and an Attending Surgeon at the Hospital for Special Surgery. He is a member of The Hip and Knee Societies. A large portion of his practice is dedicated to complex primary and revision total joint surgery. He is an active Clinical Orthopaedic Researcher with particular interests in alternative bearing surfaces for total hip replacement and rotating-platform total knee designs. He lectures extensively at both the national and international levels. He has over 100 peer-reviewed publications, book chapters, and presentations.
He has received numerous awards including: The 2013 Teaching Award given to the HSS Attending who is recognized for Outstanding Teaching on the Adult Reconstruction and Total Joint Service. The 2011 Mentorship Award given to the LHH Orthopaedic Attending who demonstrates an outstanding ability to guide, support and teach the Residents. The 2008 HAP Paul Award for the "best paper on new developments in the field of arthroplasty" awarded for MRI in the Early Detection of Particle Disease Following Total Hip Arthroplasty: A Prospective Study at the 2008 International Society for Technology in Arthroplasty, Seoul, South Korea. The 2007 Chief Resident’s Special Award given in recognition of excellent teaching in the LHH Orthopaedic Clinic. The Navy and Marine Corps Achievement Medal awarded in 2007 for performing emergency limb saving surgery on a Marine during exercises in Tan Tan, Morocco. The 2006 Hip Society British Traveling Fellowship awarded to two young surgeons allowing travel to selected hip centers in the United Kingdom for a period of 3 weeks in September 2006. The 2004 James A. Rand Award for the most outstanding paper in knee surgery presented at the Annual Meeting of the American Association of Hip and Knee Surgeons, November 2004.
He is married to his wife Andrea. They live in NYC with their 3 sons Cole (16), Conor (14) and Caden (10).